The 31 officers and soldiers were welcomed home by Lieut. Gen. Nguyen Tan Cuong, Deputy Chief of the General Staff of the Vietnam’s People Army, and representatives of Military Zone 7 and Military Hospital 175.

Following the flag ceremony, Lieut. Colonel Bui Duc Thanh, Director of the Level-2 Field Hospital No. 1, said the officers and soldiers had successfully accomplished the UN peacekeeping mission despite the difficulties in the host country and the strict standards and procedures set by the UN. 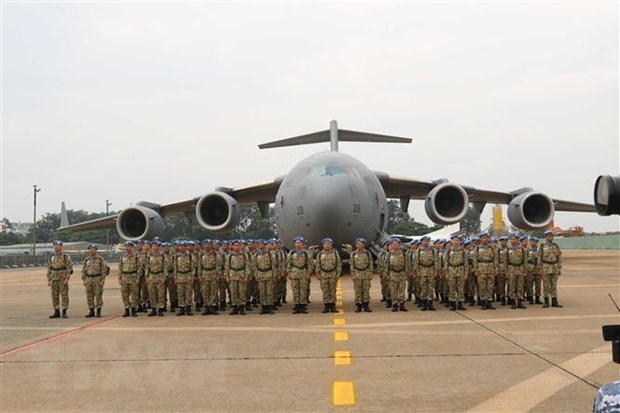 Second Lieut. Pham Thi Thuy, a doctor, said all of the hospital staff were proud to have fulfilled the tasks assigned them by the State and army.

The remaining 32 officers and soldiers at the hospital are scheduled to return home on November 28th.

An official welcoming ceremony for the hospital staff will be held in Ho Chi Minh City in early December.

The hospital set off for South Sudan on October 1, 2018. Over the past year, the Vietnamese officers and soldiers have provided health care for UN peacekeeping forces and local people in South Sudan, while participating in cultural and sporting activities.

On November 14th, the hospital was awarded a UN peacekeeping medal in recognition of its outstanding achievements in South Sudan.

The rest of the 63 members of Vietnam’s Level-2 Field Hospital No. 2 will fly to South Sudan on November 26th, along with 60 tonnes of supplies and equipment for the hospital./.