Resolution on socio-economic development plan for 2020 sails through NA

Legislators adopted a resolution on the socio-economic development plan for 2020 on November 11th - the 16th working day of the 14th National Assembly’s eighth sitting. 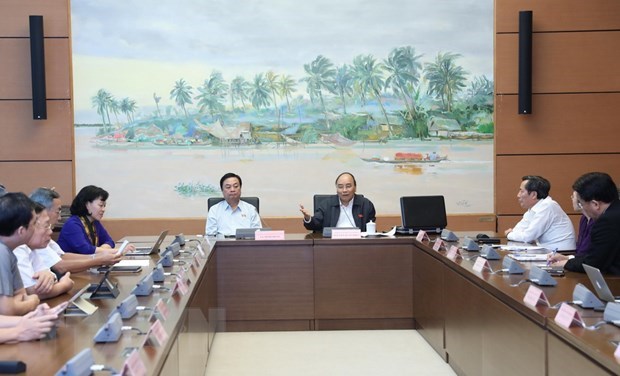 Also in the morning, they worked in groups to look into the draft law on investment in the form of public-private partnership.

In the afternoon, after hearing a report on acquiring feedback on the draft Law on Reserve Force, and discussed contentious contents of the draft law.

NA Vice Chairman Do Ba Ty said the NA Standing Committee will instruct compiling and assessing agencies to team up with competent ones to adjust and complete the draft law before submitting it to the legislature for approval.

Lawmakers are scheduled to look into a feasibility study report for the first phase of the Long Thanh International Airport on November 12, and the investment plan of the Ka Pet reservoir project in Ham Thuan Nam district, the south-central province of Binh Thuan.

They will also vote to adopt a resolution on State budget in 2020, and debate the draft law amending and supplementing some articles of the Law on the Organisation of the NA./.