Party General Secretary and President Nguyen Phu Trong has expressed his belief and desire for a bright future of the Party and nation, for a Vietnam of peace, independence and prosperity.

In an interview granted to the Vietnam News Agency (VNA) on the occasion of the 90th founding anniversary of the Communist Party of Vietnam (February 3) and the Lunar New Year, Trong said the Party’s sound leadership was the decisive factor in the country’s revolution.

The Party has been tested and continuously grown to deserve its role and mission of leading the revolution, as well as people’s confidence, he said.

Over the past nine decades, thanks to the Party’s leadership, Vietnam’s position and strength have been enhanced, and many international organisations have lauded the country’s developed economy and culture, and stable economic and social situation, along with its bright prospects.

Vietnam had never stood in such a high position before, the leader stressed, adding that Vietnam has emerged to become a middle-income nation where living standards have continuously improved.

Commending Vietnam’s performance in external affairs and international integration, and economic, trade and investment cooperation, he said the country has joined international organisations and multilateral economic cooperation institutions, and played an important role in the region and the world. 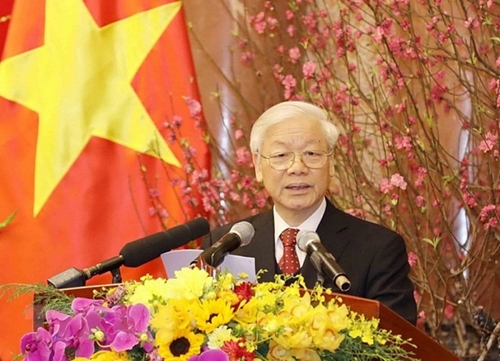 Regarding the upcoming all-level Party congresses ahead of the 13th National Party Congress, and major political tasks in 2020, Trong said the National Party Congress will review the 2016-2021 tenure, the 2011-2020 socio-economic development strategy, the 10-year implementation of the platform on national construction in the period of transition to socialism, and the 35-year reform process.

At the same time, the congress will plan orientations for 2021-2026, with visions towards 2030 when the Party will celebrate its centennial anniversary, and 2045 when the 100th National Day will be celebrated.

He emphasised the need for thorough preparations for the congress in terms of both documents and personnel, saying the building of political reports is of special significance.

Assessments must be objective and comprehensive, and must point out achievements as well as limitations and their causes, and lessons drawn, he said.

The leader affirmed the identification of targets, missions and solutions for the upcoming tenure must be made in accordance with the Party’s ideas and reality.

Laying stress on the significance of personnel work at the 13th National Party Congress, Trong reiterated that it is necessary to promote solidarity and improve personnel planning at Party committees at all levels to select qualified personnel.

With political determination from the Party and Government in the fight against corruption, he said that corruption cases and violations of Party regulations have been detected and handled, while loopholes in personnel work have been gradually closed.

The Politburo and Secretariat have issued and carried out many resolutions and directives to promote Party building and rectification, and prevent corruption and degradation, while the National Assembly and Government have penned and implemented various legal documents to complete mechanisms in economy and society to stave off corruption.

He described tackling corruption as a long-term, complicated fight that needs patience and determination, asking relevant ministries and sectors to accelerate investigations and the settlement of key corruption cases that have caused serious economic consequences, along with the recovery of stolen assets.

In his message, he called on all people and Vietnamese expatriates to promote patriotism, self-reliance, desire and enthusiasm for a country of peace, independence and prosperity.

He expressed his hope that international friends will continue to support Vietnam’s national construction and safeguarding, for peace, progress and happiness of Vietnamese people and people around the world.