Vietnam and the UK are working to complete legal and technical procedures to repatriate the bodies of 39 Vietnamese who found dead in a lorry in Essex last month, Deputy Minister of Foreign Affairs Bui Thanh Son said on November 25th on the sidelines of the 14th National Assembly’s eighth sitting. 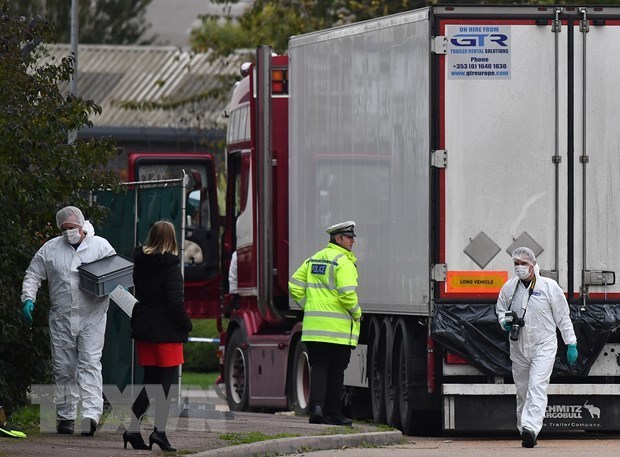 Vietnam and the UK are working to complete legal and technical procedures to repatriate the bodies of 39 Vietnamese who found dead in a lorry in Essex last month. (Photo: AFP)

Along with technical procedures, the return of the bodies needs approval from the UK’s judges.

“Both sides are working closely, with hope to bring the victims’ remains home as soon as possible”, Son said.

According to the deputy minister, most of the victims’ families wanted to receive the bodies and few agreed to receive cremated remains.

Earlier on November 21st, Son said that the Vietnamese Government would pay in advance for the return of the bodies and cremains. The victims’ families would then refund the Government.

The diplomat also said that if any charity, businesses or benefactors wish to provide support for the victims' families, they could work directly with the families and local governments.

According to an official document released the Ministry of Foreign Affairs, the fee to bring a jar of ashes to Noi Bai Airport is 1,370 GBP, equivalent to 41.1 million VND.

Body repatriation in a coffin made of zinc can cost up to 2,208 GBP, or 66 million VND.

The ministry asked local authorities to make plans to receive the bodies or ashes and transport them to their hometowns.

The number of coffins and jars and repatriation time will be announced later./.