The Ministry of Public Security has officially established an airborne security unit under the Immigration Department, which is responsible for preventing and combating terrorist attacks and unlawful interference to ensure aviation security in Vietnam.

After the Government issued Decree No.922015 on October 13, 2015 on aviation security, the Ministry of Public Security directed the Border Security Department under the General Department of Security (now the Immigration Department) to build a scheme on airborne security force.

The Immigration Department has coordinated with competent ministries and agencies to complete the tasks and reported to the ministry for approval in early 2020. 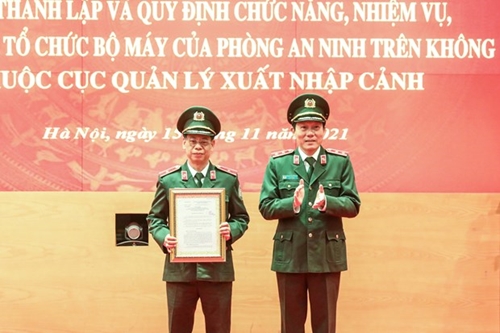 Deputy Minister Luong Tam Quang hands over the decision on the establishment of the Airborne Security Desk.

The airborne security force is in charge of preventing and combating terrorism, unlawful interference to ensure flight security of Vietnamese airlines. It would collect, synthesize, analyze, evaluate and forecast the situation related to acts that threatened the security and safety of Vietnam's civil aviation.

In addition, this force will give advice to and propose the Immigration Department on guidelines and plans to proactively detect acts of terrorism.

It will take responsibility to coordinate with the flight crew in handling unlawful interference or unexpected situations. It is allowed to use weapons or technical means in order to neutralize illegal acts of interference against the aircraft according to the provisions of law, and also coordinates with airlines and functional forces at home and abroad to solve problems related to security on aircraft.

In special cases, the airborne security force can require the Immigration Department to suspend flights when there were possibilities of terrorist attacks or unlawful interference.

This force will coordinate with the Ministry of Public Security and the aviation industry to escort people who were extradited or serving prison sentences from abroad to Vietnam and vice versa, expulsed foreigners, Vietnamese deported people or those wanted by Interpol.

The Ministry of Public Security will be in charge of recruiting and training officers to deploy security forces in the air on flights and routes.

Speaking at a ceremony to announce the Minister of Public Security’s decision on the establishment of the Airborne Security Desk on November 15, Deputy Minister Luong Tam Quang said that the decision showed the increasing requirement on airborne security protection.