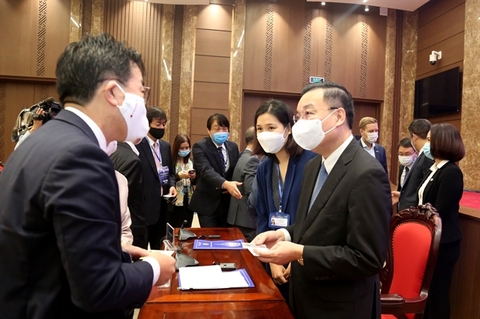 Ha Noi's leaders talk to foreign investors at an event held in-person in the capital city on Tuesday. — VGP Photo

"The city authority considers the protection of investors' rights and interests among its most important policies, as well as a harmonious relationship among the State, the investors and the labour forces," said Ha Noi's party secretary Dinh Tien Dung, also a member of the Politburo.

Dung said in recent years, the city had implemented policies to identify and resolve difficulties experienced by foreign investors including numerous administrative reforms, improvements to the business environment and to boost the city's competitive advantages.

The city reported US$1.28 billion in newly-registered investment during September despite a prolonged lockdown that lasted almost three months as a result of the fourth outbreak of the coronavirus.

"This is a testament to foreign investors' confidence in the city as a destination for investment as well as in its potential," Dung told Viet Nam News.

He said Ha Noi fully understood the challenges faced by the business community during the pandemic. The city's authority would be willing to listen, gather feedback and opinions and study proposals shared by the foreign investor community, especially in measures to help reopen the economy and boost recovery speed.

Trade and commercial activities had been severely hampered with the supply chain taking heavy hits. Flow of goods and services had been disrupted causing a number of problems for foreign investors.

Dung said the most important mission objective for the city was virus control. Ha Noi had set a goal to quickly put the situation under control while committing all available resources to support foreign investors to resume business operations and minimise damage caused by the virus.

The city's tax department had been instructed to extend the deadline for payments of VAT tax, business income tax, land-use fees for the year for over 31,000 businesses. The support measure had been estimated to be around VND22 trillion ($972 million). Over 650 businesses had also had their land-use fees reduced by 30 per cent for a total of VND250 billion since the implementation of Prime Minister's Decision 27.

"Businesses located in areas under lockdown who failed to file their tax applications by our deadlines will be forgiven. No penalties," deputy chairman of the city's People's Committee Nguyen Manh Quyen told Viet Nam News.

Quyen said the city had been working round the clock to ensure import/export activities stay safe and uninterrupted. It has also been building a detailed roadmap and guideline for industrial parks and businesses across the city to resume operations.

At the meeting, a representative from the Japanese Chamber of Commerce and Industry in Vietnam proposed a number of solutions to help businesses stay open in potential future outbreaks. He asked the city to allow workers who have been vaccinated to commute to work regardless of their districts' virus status. He also asked for COVID-19 test results to be valid for 2 weeks and sample testing of no more than 5-10 per cent of all workers in a factory instead of everyone.

Vice president of EuroCham Nguyen Hai Minh asked the city to give more autonomy to businesses in COVID-19 response. He said as the current entry application to Viet Nam was already strict and time-consuming the city should consider removing several overlapping measures such as city-mandate quarantine and testings.

Dung said the city had been and would always stand with the business community and promised issues raised by businesses would be looked at and handled in a timely manner. He said the meeting, among the very first events in which participants take part in person since the lockdown lifted, was to send a strong message to foreign investors that the city was ready for the new normal and for an economic revival campaign to start.