Party General Secretary and President Nguyen Phu Trong has hailed the public security force for its 10 outstanding achievements in 2019. 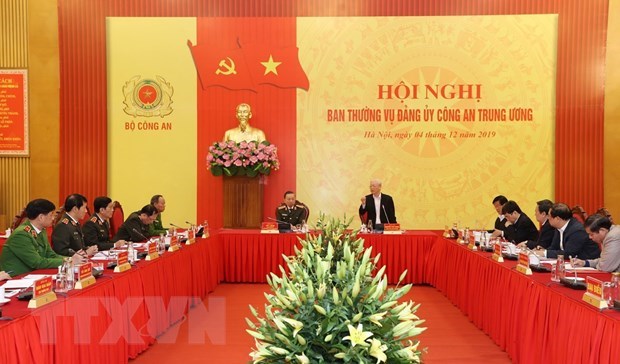 Addressing a conference on December 4th held by the standing board of the Central Public Security Commission, the Party leader affirmed that the people’s public security force has played an extremely important role in maintaining political security and social order and safety; and in making timely advice to the Party and State on essential issues and strategies.

First of all, the force has taken initiative in monitoring, analyzing and forecasting the situation, and timely provided strategic recommendation to the Party and State in outlining directions and policies on politics, economy, external relations and ensuring national interests, security and social order and safety.

Fourth, the force has fulfilled and surpassed targets on crime prevention and combat set by the National Assembly.

Fifth, the effectiveness of State management in security and order has been enhanced, particularly traffic accidents and fatalities have dropped.

Sixth, the quality of professional work has been improved, contributing to the fight against crime.

Seventh, the coordination between the Ministry of Public Security and other ministries, agencies, sectors, localities in protecting security and order as well as in building the movement of involving all people in protecting State security has produced important results.

Eighth, the force has focused on Party building work and achieved good results.

Ninth, financial, investment and technical-logistic work has met the requirements of the force’s tasks.

Tenth, the leadership and commanding work continued to be enhanced and reformed in the direction of closely following the reality and situation at grassroots level.

The Party leader reminded the force that 2020 will see many important political events of the country. The force should analysed the causes of outstanding shortcomings and limitations in order to seek suitable solutions to those problems, thus fulfilling the targets and requirements set for the year.

At the conference, delegates focused on assessing the security and order situation along with the performance of the public security force in 2019. They analysed the causes behind the shortcomings and limitations of the force during last year, and outlined the targets, requirements and key tasks regarding the maintenance of security and order and building of the force in 2020.

The conference also evaluated the outcomes of the implementation of the Politburo’s Resolution 22-NQ/TW on continuing to reshuffle the apparatus of the Ministry of Public Security over the past nearly two years./.