Party General Secretary and President Nguyen Phu Trong chairs a get-together on the occasion of the traditional Lunar New Year on January 22nd with veteran revolutionaries, current and former leaders of the Party, State, Vietnam Fatherland Front, and overseas Vietnamese. 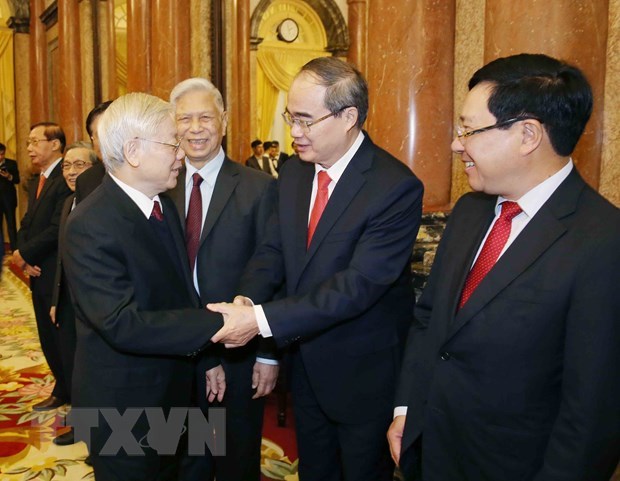 The Party and State leader offered his New Year wishes to all veteran revolutionaries, incumbent and former leaders of the Party, State and the Vietnam Fatherland Front as well as the entire Vietnamese people in and outside the country on the occasion of the Lunar New Year festival (Tet).

He highlighted the great achievements that the country has gained in almost all the fields in 2019, saying that with an economic growth of over 7 percent, Vietnam is among the countries with the highest growth in the region and the world.

The GDP scale reached 266 billion USD and per capita income stood at 2,800 USD. Meanwhile, the macro-economy has been kept stable and inflation placed under control.

2019 is the second consecutive year that all the 12 targets set by the National Assembly  have been completed, he said.

Vietnam was elected as a non-permanent member of the UN Security Council, contributing to improving the prestige, role and position of the country in the international arena, he stressed.

The Party and State leader also underlined achievements in Party and political system building, as well as in the fight against corruption and wastefulness, saying that the concerted, firm and comprehensive measures that avoided neither “banned zone” nor exception in the work have produced big effects. The investigation and trial of many major economic and corruptive cases have won the support and approval of officials, Party members and people.

He spotlighted the crucial significance of 2020 as it is the last year implementing the Resolution of the 12th National Party Congress; and the year for conducting party congresses at all levels towards the 13th National Congress of the Party.

Vietnam will mark the 90th founding anniversary of the Communist Party of Vietnam and the VFF, the 75th National Day, the 130th birthday of President Ho Chi Minh in the year. The country is also serving as Chair of the ASEAN and a non-permanent member of the UN Security Council for the term 2020-2021, he said.

The Party and State leader called on the whole Party, the entire people and army to make greater efforts to overcome difficulties and challenges, and fully tap all potential, advantages and resources, in order to strengthen the macro-economic foundation, control inflation, improve internal capacity and autonomy of the economy.

It is necessary to focus on improving the business and investment environment, promoting faster, more sustainable and substantive growth, he said, adding that attention should be paid to managing natural resources, protecting the environment, preventing natural disasters and adapting to climate change.

He asked for special attention to be paid to strengthening the defense and security strength; firmly maintaining the independence, sovereignty, unity and territorial integrity of the country; maintaining political stability, social order and safety; and improving the effectiveness of diplomatic activities and international integration.

Vietnam will strive to successfully complete its tasks as ASEAN Chair in 2020 and non-permanent member of the UN Security Council for the term 2020-2021, thus promoting Vietnam as a reliable partner for sustainable peace to international friends, he said.

The Party chief emphasized the need to promote the building of the Party and political system along with the intensive implementation of the campaign on studying and following of President Ho Chi Minh’s thought, morality and lifestyle, while fighting degradation in political ideology, morality, lifestyle, “self-evolution” and “self-transformation” among Party officials and members.

He underlined that the personal work must be improved and efforts focused on making thorough preparations for the organization of Party congresses at all levels towards the 13th National Party Congress.

“Whether we can awake the potential and turn it into our resources for national construction and defence depends on the will of the entire Party and nation as well as of each Vietnamese,” the Party and State leader said, expressing his belief that the country will gain greater achievements in 2020./.