The Republic of Korea (RoK) and Singapore on November 23 reached an agreement to strengthen partnerships in various fields, including developing weapons and smart cities on the basis of the bilateral traditional cooperation. 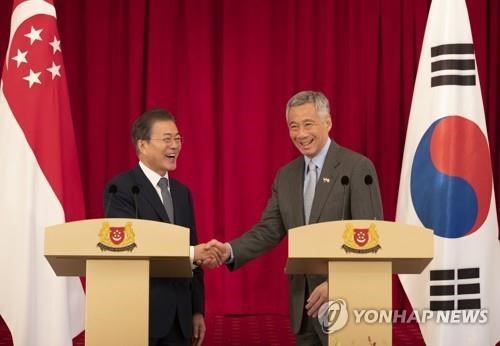 The two leaders had broad and in-depth discussions on ways for cooperation to promote co-prosperity and friendliness, and establish peace on the Korean Peninsula and in the region.

Moon asked Singapore to keep playing a constructive role in completing the denuclearization and promoting sustainable peace on the Korean Peninsula.

For his part, Lee told Moon that the two sides are “optimal" partners to lead the fourth industrial revolution era together.

They agreed that the two countries have great potential for cooperation in developing smart cities.

The leaders pledged to bolster cooperation to prepare for future defense demand, and expand bilateral partnerships on developing military technology.

On the occasion, the two sides signed a memorandum of understanding on cyber security./.