A seminar discussing the virtues of Uncle Ho’s soldiers was co-held on the morning of October 9 in Hanoi by the People’s Army Newspaper, in collaboration with the Department of Mass Mobilization and the Military Broadcasting Center under the General Department of Politics of the Vietnam People’s Army. 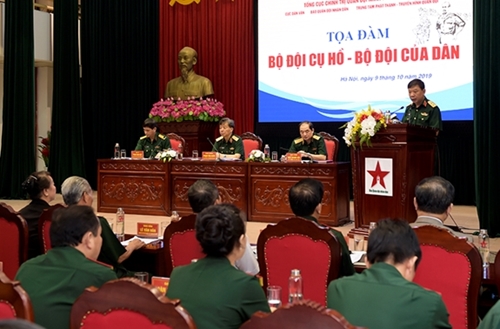 During the seminar, a number of the reports delivered by delegates analyzed the VPA’s operations in performing its function in working, conducting mass mobilization, strengthening political systems at the grassroots level, developing socio-economy, consolidating defense-security, and joining hands in search and rescue missions.Major General Pham Van Huan, Editor-in-Chief of the PAN; Major General Ngo Thanh Hai, Director of the Department of Mass Mobilization; and Senior Colonel Phan Anh Viet, Deputy Director of the Military Broadcasting Center, co-chaired the event.

At the same time, the participants pointed out several approaches and solutions to helping the military further improve mass mobilization contents and methods as well as more effectively performing its function in working, contributing to upholding the noble virtues of Uncle Ho’s soldiers.

Through discussions at the event, military units were urged to continuously spread and increase exemplary individuals and models in implementing mass mobilization while promoting the movement of learning and following President Ho Chi Minh's thought, morals and style.

The outcomes of the seminar will brighten the VPA’s position and shape the personality of revolutionary soldiers to become a symbol of Vietnamese revolutionary heroism.