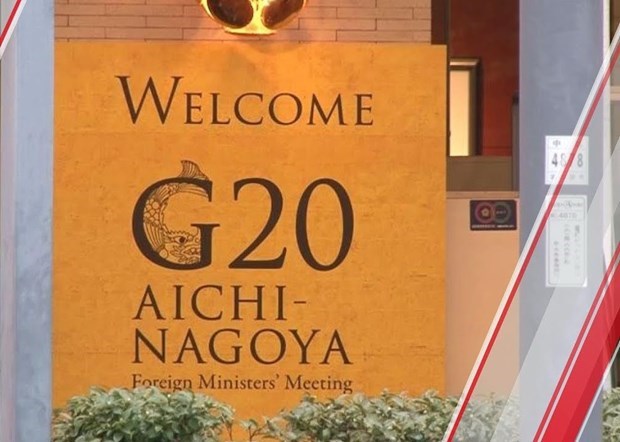 Addressing a session of the G20 Foreign Ministers’ Meeting in Japan’s Nagoya city on November 23rd to which Vietnam is an invited guest, Son suggested G20 and multilateral institutions promote multilateralism and take the pioneer role in fully implementing international commitments, responsibly contributing to a rules-based world order, equality and sustainability.

Vietnam, in its capacity as the ASEAN Chair in 2020 and non-permanent member of the United Nations Security Council for the 2020-2021 tenure, will join the international community in strengthening coordination and support among global institutions and regional organisations to contribute to strengthening peace, stability and sustainable development, he said.

In his remarks at another session on sustainable development, Son affirmed that Vietnam has fully realised the 2030 Agenda and the Paris Agreement, and wants to work together with other countries to enhance coordination and cooperation between the ASEAN and the UN and multilateral organisations in an effort to narrow development gaps and successfully complete sustainable development goals (SDGs) in the region, including sustainable management and use of water resources and climate change combat in the Lower Mekong River Basin.

The official also suggested the countries push ahead with the formation of a global network connecting innovation centres to enable developing countries to optimise opportunities offered by innovations and creations, accelerate the establishment of a global framework on maritime plastic waste prevention, and step up collaboration with and support for the ASEAN and Vietnam in deploying specific projects on plastic waste reduction and environmental protection.

Foreign ministers from G20 and nine guest economies, including Vietnam, reached consensus on efforts to reform the World Trade Organisation (WTO), and on the need to increase the mobilisation of resources as well as regional and global cooperation in realising the 2030 Agenda and SDGs.

On the sidelines of the meeting, Son met with foreign ministers and heads of delegation from such countries as Japan, the US, China, the UK, Canada, France, Australia, Chile and Argentina.

The foreign officials lauded Vietnam’s role and prestige, and wished to enhance coordination and cooperation with the country, both bilaterally and multilaterally, especially when Vietnam assumes the posts of ASEAN Chair in 2020 and non-permanent member of the UN Security Council for the 2020-2021 tenure.

On November 22nd, Son had a meeting with Aichi prefecture’s Governor Hideaki Omura, during which the Vietnamese official highlighted the fruitful Vietnam-Japan relationship, with partnerships between their localities as the pillar.

He also stressed the increasing number of Aichi investors in Vietnam, and expressed hope that the prefecture will receive more Vietnamese students.

For his part, Omura said about 180 businesses from Aichi have invested in Vietnam, and the number is projected to rise in the time ahead.

According to the Governor, the prefecture will partner with Vietnam’s national flag carrier Vietnam Airlines to open a direct air route between Aichi and major Vietnamese cities./.