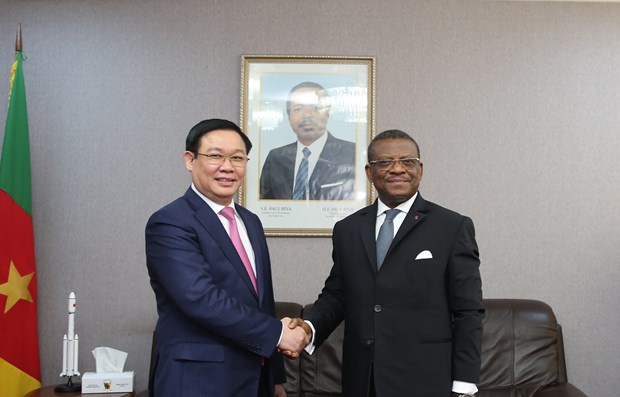 At the talks with PM Joseph Dion Ngute, the Vietnamese Deputy PM affirmed Vietnam’s policy on promoting multi-faceted cooperation, particularly in economics and trade, with African countries, including Cameroon, on the basis of their political trust and traditional friendship and mutual support.

Hue said to facilitate stronger bilateral collaboration, the two countries should intensify negotiation for the early signing of bilateral agreements, creating the legal framework for trade as well as cooperation in other fields.

He affirmed that Cameroon hopes to set up cooperative ties with Vietnam across the fields, with a focus on sectors where Cameroon has great potential and Vietnam is strong at, such as agriculture and processing of cashew nut, wood and coffee. He added that his country also wishes to boost the bilateral partnership in telecommunications, which has already started with the operation of Nextel, a joint venture between Vietnam’s Viettel group and Cameroon partner.

Discussing support for Vietnamese businesses operating in Cameroon including Nextel, Deputy PM Hue appreciated the work of the Cameroon Government and PM Joseph Dion Ngute himself to facilitate their operation.

At working sessions with Vice President of the Senate Lamido Abubakary Abdulaye and Vice President of the National Assembly Etong Nzok Hilarion, Deputy PM Hue highlighted the role of the two countries’ parliaments in supervising and making laws to facilitate the negotiations and signing of bilateral agreements, thus creating legal corridor for trade exchanges.

He also noted the need to increase the exchange of delegations between the two countries’ governments, sectors, trade associations and people, as well as promote cooperation in culture, education, sports and people-to-people exchange./.