Vietnam advanced to the final of the men’s football at the ongoing 30th Southeast Asian Games (SEA Games 30) in the Philippines, after beating Cambodian rivals 4-0 in the semi-final match on December 7th. 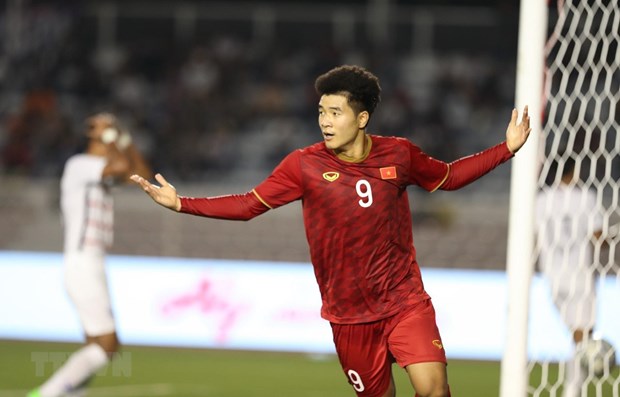 Striker Duc Chinh scores a hattrick in the match against Cambodia to help Vietnam advance to the final (Source:VNA)

Starting the match, Vietnam’s head coach Park Hang-seo surprised many by fielding two forwards, Tien Linh and Duc Chinh, for the first time since the start of the Games. On the other side, Cambodia’s head coach Flex Damas proved that the team did not enter the semi-final match with sheer luck as the players started it with successive attacks that caused quite a few difficulties to Vietnam.

However, it was Vietnam to open the score with a header by Linh after a perfect pass from Chinh at the 20th minute. This forced the Cambodian team to launch more attacks in search for an equalizer, but also created chances for Chinh to score twice at the 27th and 45th minutes.

Into the second half, Cambodia tried to find the net of their rivals, just of no avail. And once again Chinh proved coach Park’s decision was right by scoring one more goal at the 69th minute.

In the last minute, Cambodia were awarded a penalty, but goalie Van Toan made a perfect save, silencing his critics for his fault in an earlier match.

With the win, Vietnam will face Indonesia in the final on December 10th.