Prime Minister Pham Minh Chinh hosted a reception in Hanoi on November 6 for the newly-appointed Belgian Ambassador to Vietnam Karl Van Den Bossche, during which the host affirmed that Vietnam always treasures its ties with Belgium. 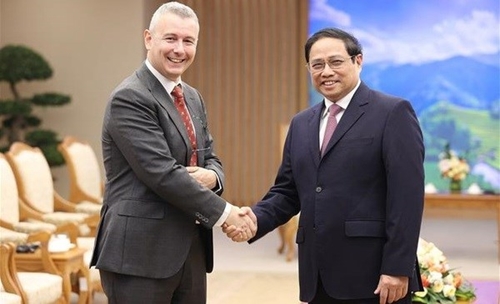 PM Chinh said that he hoped during his working tenure, the Belgian diplomat will make contributions to the growth of the Vietnam-Belgium friendship and cooperation, especially when the two countries will celebrate the 50th founding anniversary of diplomatic relations, and the 5th anniversary of bilateral strategic partnership in agriculture in 2023.

The PM thanked the Government and people of Belgium for providing 100,000 doses of Astra Zeneca COVID-19 vaccine for Vietnam, considering it as a kind gesture in the bilateral relationship.

Highlighting the positive development of the Vietnam-Belgium relationship in all fields and at all levels despite COVID-19 impacts, the government leader suggested the two countries increase the exchange of delegations at all levels, especially high-level ones to seek specific measures to strengthen multifaceted cooperation between the two countries.

PM Chinh expressed delight at the rise in two-way trade, noting that the figure reached USD 3.3 billion in the first eight months of this year, and many Belgium businesses have successfully operated in Vietnam, especially in maritime transport, logistics and renewable energy.

He suggested Belgium create favorable conditions for Vietnamese farm produce to enter the market, expressing his hope that the business community of the two countries will continue to cooperate closely and optimize all opportunities from the Vietnam-E.U. Free Trade Agreement (EVFTA) to beef up bilateral trade and investment ties.

The two countries should continue to cooperate with and support each other at multilateral forums and organizations, especially the United Nations, Asia- Europe Meeting, International Organization of La Francophonie (OIF), and ASEAN-E.U. Summit, and coordinate in organizing the ASEAN-E.U. Summit in mid-December in Belgium, he said.

For his part, Bossche underlined that Belgium always attaches great importance to its friendship and cooperation with Vietnam, and lauded Vietnam’s achievements in post-pandemic socio-economic recovery and development as well as the country’s role and position in the region and the world.

The ambassador pledged that he will work hard to further promote the partnership between the two countries in areas where Belgium has strength and Vietnam has demand such as sustainable agriculture, digital economy, green growth and energy transition.

He also vowed to coordinate with the Vietnamese side to organize celebrations of the 50th anniversary of the bilateral diplomatic relations.

The diplomat also stressed that he will focus on bolstering bilateral economic, trade and investment cooperation and bringing more Belgian investors to Vietnam, adding that the Belgian side will work closely with Vietnam to hold the meeting of the Vietnam-Belgium Joint Committee and political consultation in mid-November.

Regarding the East Sea issue, the two sides agreed on the importance of maintaining peace, stability, security, safety and freedom of navigation and aviation, as well as the peaceful settlement of disputes in line with international law, including the U.N. Convention on the Law of the Sea (UNCLOS) 1982.