No treatment discrimination but resolute quarantine against COVID-19

Prime Minister Nguyen Xuan Phuc on March 2 emphasized both the requirement for no treatment discrimination against those who have gone through regions hit by the COVID-19 to Vietnam and the need to step up quarantine, saying it is a useful measure to control the epidemic.

Speaking at a meeting between permanent Cabinet members and the national steering committee for COVID-19 prevention and control in Hanoi, the leader also asked the committee and agencies to stay vigilant and take drastic actions against the epidemic.

Protecting people’s life and health is the leading task at this time, he said, noting that public health must be ensured even at the expense of some economic benefits in the short term, given the worldwide spread of the disease.

“This is the highest requirement from the Prime Minister, and Party and State leaders to agencies and localities,” he stressed. 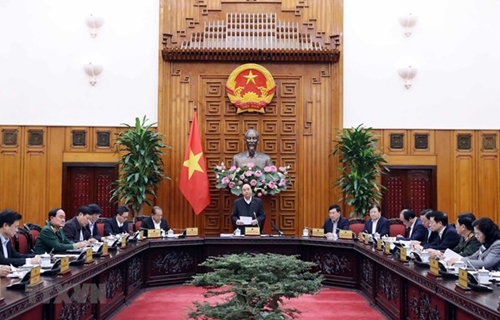 PM Phuc also ordered more equipment in service of the combat, restriction of trips to and from virus-affected areas and intensification of the communication work to raise public awareness of the epidemic.

The Association of the Southeast Asian Nations (ASEAN)’s spirit of “cohesive and responsive” should be carried forward in the fight against COVID-19, he said, calling for joint efforts of individuals, organizations and localities in this regard.

As for the huge losses facing tourism, aviation and other sectors, the PM pledged that the Government will roll out specific monetary and fiscal measures and other incentives to facilitate production and business activities. He also called for enhanced online transactions to prevent the epidemic.

At the meeting, the committee reported that from February 13 to 12:00 on March 2, no new COVID-19 cases had been recorded in Vietnam. Currently, there have been 115 suspected cases that are being quarantined.

Those who come from the Republic of Korea (RoK), Iran and Italy which are experiencing the alarming spread of the virus are quarantined for 14 days, the committee said, adding that it has warned people against traveling to the countries.

On March 2, the National Hospital for Tropical Diseases in Hanoi’s outskirts district of Dong Anh allowed 30 Vietnamese citizens who returned from China’s Wuhan city to go home after a 21-day quarantine.