“The heart is worthwhile thrice the talent”

“It is more blessed to give than to receive”. Ms. Nguyen Kim Thuy, a philanthropist with a heart of gold, always puts a smile on every person’s face she meets and touches people in a special way.

Ms. Nguyen Kim Thuy made a vow to give her time, talent, and treasure for charity, attracting many people of the same mind to give back to community. Her initiative is bringing the less fortunate happiness, offering a hand up for their employment. From her perspective, a steady job is the vital step for the unfortunate people to break the poverty trap and build their own self-sufficiency.

As a successful businesswoman, Ms. Nguyen Kim Thuy is strong, assertive, and passionate about helping underprivileged people. Following Buddhism, she strongly believes that “continually give, continually gain”. Giving back, therefore, is the best way to make a difference for generations to come. 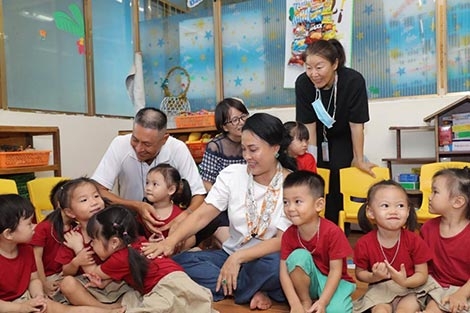 Ms. Nguyen Kim Thuy was born and raised in Hai Phong city. She is the daughter of a Hero of Labor in the Doi Moi era. Her father, Mr. Nguyen Gia Thao, is a General Director of Hai Phong Leather Footwear Enterprise. He is a well-known businessman since the 80s of the twentieth century. Mr. Nguyen Gia Thao is a leader of the largest contemporary leather factories in North Vietnam, specializing in outsourcing to Czechoslovakia.

In the late 1980s, Hai Phong leather factory had to be closed due to several external factors and the Czechoslovakia’s contract cancellation. Mr. Nguyen Gia Thao, as a dynamic and creative leader, did not give up the business downturn. He, in contrast, took advantage of the golden opportunity in which the Vietnam government was stimulating foreign investment, finding partners from Taiwan and China to sign the new business contracts.

At the beginning of 1990, Mr. Nguyen Gia Thao met the Vice Chairman of State Committee for Cooperation and Investment (SCCI) to bid for the contract with Taiwanese and Chinese partners. The successful cooperation not only helped Mr. Thao’s factory get through the tough time in business, creating thousands of new stable-paying jobs, but also increased production capacity, stimulating the overall economic growth of Hai Phong city.

According to Ms. Nguyen Kim Thuy, her father placed great trust in her. Inspired by her father and his generations, she has become a part of an existing family giving tradition, actively engaging in philanthropy. Her father, after restoring the factory’s business to full strength, dedicated himself to improve the workers’ living conditions, support families in need, and donate money, personal consumption, or construction materials to local and national charities.

Mr. Nguyen Gia Thao died at the age of 70. Huge numbers of mourners gather at cemetery, expressed their deep heartfelt gratitude to him. Inheriting the father’s business, Ms. Nguyen Kim Thuy created her own path to business development, creating a new brand - Dinh Vang Group. The factory, located in Hai Phong and several southern provinces, manufacturers shoes, briefcases, and bags with approximately 30.000 workers; 80 percent of those are female. 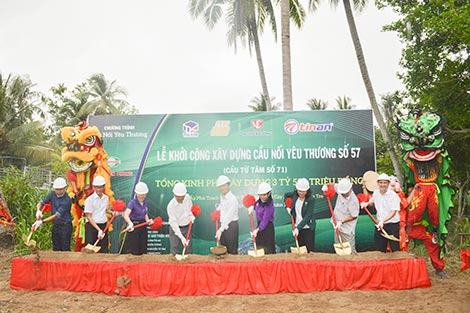 As a loyal Buddhist, Ms. Thuy strongly believes that “one good turn deserves another”.  She has been actively participating in charity works to support people in need.

As a representative of Dinh Vang Group, she held a ceremony of presenting four low-income houses for the poverty-stricken households: Ms. Hoang Van Thanh, Mrs. Nguyen Thi Mung, Ms. Nguyen Van Lon and Ms. Luong Van Vi at Van Yen district, Yen Bai province. As a representative of Tue Tam Charity Group, she led a Sen Tu Tam group, the 12A1 class (1982-1985) at Ngo Quyen high school, Hai Phong attend the inauguration of Tue Tam 08 Bridge at Thanh My village, Vinh Thanh district, Can Tho city. This is the 8th bridge donated by Tue Tam Charity Group with the intention of meeting the transportation needs of more than 1.000 locals. Other bridges had been built in Dong Thap, Tra Vinh, Soc Trang, Ben Tre, etc.

She often holds many charity events for Hai Phong Psychiatric Hospital and Thien Giao Committee of the Red Cross – an organization raised the children of Agent Orange. She often pays a visit and hands gifts to homeless seniors and orphans at Hoa Phuong Orphanage.

Specifically, there is a special case of a kid named Tran Thanh Phuong, who is disabled due to Agent Orange, living at My Hiep Son, Hon Dat district, Kien Giang province. Phuong will be supported for the rest of her life by Ms. Thuy.

Ms. Nguyen Kim Thuy shared: “There is always a lullaby in my mind: “Oh gourd, love the pumpkin. Though of different species, you share the same trellis”. Learning many a lesson about life at the school of hard knocks deepens my understanding of this lullaby. I have worked really hard on helping those at the very bottom because “when we give cheerfully and accept gratefully, everyone is blessed.””

“Everyone has different destiny, and I feel that I am luckier than other people. I have a chosen career that I am passionate about, a happy life that I enjoyed, and I am trying to achieve all my ambitions to make my life more meaningful. From my points of view, if the philanthropy goes to the heart of community, people will make the world a better place to live.”

Ms. Nguyen Kim Thuy have been creating 30,000 factory jobs, expanding export to take Vietnamese brand to the global stage for more than 25 years. Her success, according to her, is generally attributed to her family’s philanthropic and business endeavors, her astute characteristic and her husband’s wholehearted supports.

She also mentioned that her father was born in the old town of Hanoi. He was living in a period of national turbulence. In 1946, like many other Hanoian patriotic families, his family evacuated to the resistance zone in Phu Tho during Vietnamese resistance war against French colonialism. Living in the resistance war zone plucked up his courage and determination to contribute to the national liberation.

In 1951, a 15-year-old boy Nguyen Gia Thao joined a cadet in Son La. A year later, while his troops were deployed to Laos to root out the terrorists, Nguyen Gia Theo, due to his young age, was sent back to his province, reunifying his family. In 1955, the war ended, Nguyen Gia Thao and his family returned to Hanoi. This was the time he started an apprenticeship with a shoemaking shop. After completing his training, Nguyen Gia Thao worked as a shoemaker at Gia Lam Military Supply Factory, Cong Luc Cooperative, and Thuy Khue Shoe Factory.

In 1960, thanks to his thirst for knowledge and creative businessman, Nguyen Gia Thao moved up the career ladder, ranking his job level as 5/7. Hearing that Czechoslovak government was supporting to build an export footwear factory in Hai Phong, he moved to that city, honing his skills, and launching his career in the area.

Ms. Nguyen Kim Thuy and other Buddhists released fishes to pray for security.

Ms. Thuy described his father as a big contributor to the footwear industry and a great inspirer to her family’s giving tradition. Ms. Thuy also mentioned that "a small swallow does not make the spring". Charity work, hence, requires the communal collaboration because there is an enormous number of people living in conditions of poverty.

Poverty cannot be ended by only one or two individuals. This challenging task requires the whole social collaboration. The cooperation would preserve national unity. According to Ms. Thuy, “it is more blessed to give than to receive”. She always keeps in mind that: “The nature of goodness derives from our heart. Therefore, the heart is worthwhile thrice the talent.”