Nguyen Ha was in a hurry. He came to know through social media that there were some free mask distribution sites, and was desperate to get some. 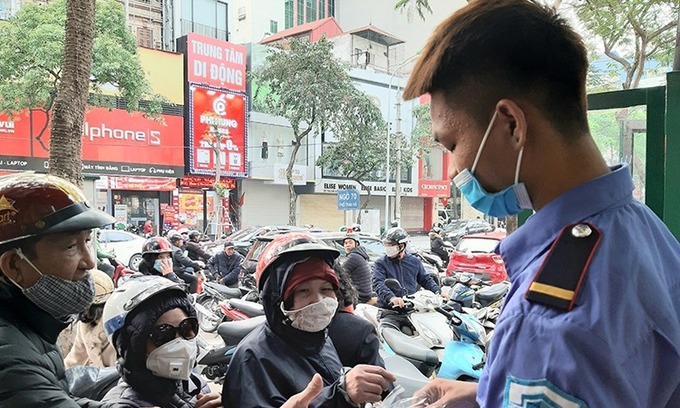 The 64-year-old resident of Hanoi’s Long Bien District has failed to get any in shops or pharmacies following mounting fears over the contagious new coronavirus that had already killed several hundred people in China.

The death toll from the epidemic had reached 362: 361 people in China and one in the Phillipines. More than 17,000 have been infected.

Vietnam confirmed Monday that a 29-year-old worker returning from Wuhan is the nation's eighth patient infected with the new pneumonia causing coronavirus. Other patients include two Chinese nationals and a hotel receptionist in Nha Trang who received them.

Ha asked his daughter to take him on their motorbike all the way to Ba Trieu Street, several kilometers away. However when they arrived there, the free masks had already run out. Father and daughter rushed to Thai Ha Street next. He was disappointed at being given just one, instead of the three that had been reported on social media.

Ha tried to convince the distributors to give him one more."I heard that this pneumonia has become an epidemic so I am very worried. I asked to buy more but people here refused. I went to several pharmacies but the price was too high in some places while others had no stock," he said.

Like Ha, Nguyen Manh of Cau Giay District also visited a free mark distribution site. He explained that he has two young children, two and four years old, and asked for two additional masks. The person handing out the free masks advised him to go to Phuong Mai Street if he wanted to buy more, and Manh proceeded to go there in a hurry.

On Thai Ha Street, 54-year-old Hoang Thi Hong Tham, a resident of Nguyen Thi Dinh Street, went to collect the free masks carrying a business registration certificate with a list of 20 employees. She had no chance to show it, however. She was told no free mask would be given to people not present to collect it in person.

"I heard that they were giving out masks for free, so I came. If they sell in bulk, I will still buy," Tham said, disappointed.

Tran Xuan Chien, a guard at a store giving out free masks, said he’d been working constantly from early morning to late afternoon.

"Everyone who comes wonders why they only get one mask, or why we don't sell the whole box. Everyone asks for more. We also want to distribute more but the stock is running out. So we must spare some for others who keep coming."

On the evening of January 30th, when many people did not know about the free mask distribution, he was giving out three masks to each person. But the very next day, the number of people increased and he could only hand out one per person.

Nguyen Thi Thao, 34, who runs three beauty shops, was one of the people who chose to give out masks for free. She said that by 4 p.m. on January 31, they had handed out 7,000 masks. They had run out of stock in two of her shops even after she managed to get an additional 1,000 from her friends.

"I decided to do this knowing that the epidemic was causing a lot of anxiety and prices had increased in many places. I am also doing it so that people become more aware of protecting their health," she said.

Hoang Hoa, 38, was eager to return home to her apartment on My Dinh Street after learning that the complex’s management was distributing masks for free. She had rushed out to work in the morning. However, by the time she got back, they had run out.

Do Tuan Minh, a member of the apartment complex management board, said that with 1,500 residents, "the number of people coming in and out is too big, and there are not enough masks." He said the board planned to procure more masks for free distribution in the coming days.

Khong Minh Tuan, deputy director of Hanoi Center for Preventive Medicine, said the city was preparing to procure 15-20 million face masks for free distribution. But he also admitted that there was a scarcity of masks in the market and would prioritize giving free masks to students in the coming week.

However, it was not clear for how long authorities or private individuals/businesses would be able to give out the single-use masks. Meanwhile, local reports say that masks can now be bought online in bulk.