Vietnam defeated Group G’s favourites the United Arab Emirates (UAE) 1-0 in their match of the 2022 FIFA World Cup’s second qualifying round at the Hanoi-based My Dinh National Stadium on November 14th.

With this victory, Vietnam secured the top spot of Group G with 10 points after four matches.

The first half barely saw clear-cut chances and shots from both sides. 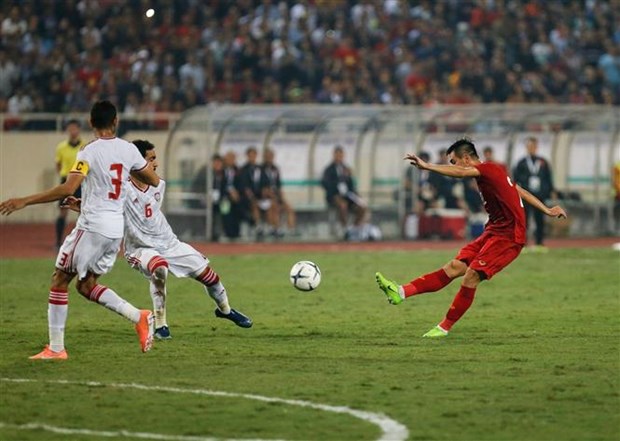 Vietnam were granted a free-kick, however, Nguyen Quang Hai failed to open the scoreboard.

At the stroke of half-time, Tien Linh made the home crowd go wild with a right-footed strike from the edge of the box, which hit the crossbar and went in.

Entering the second half, both teams sped up the game with more chances created.

Vietnam could have doubled their lead if Quang Hai’s left-footer from the edge of the box in the 90th minute had more accuracy.

In another other match of Group G on the same day, Malaysia defeated Thailand 2-1 in their home ground.
Vietnam will face Thailand in Hanoi five days later.

Earlier, Vietnam secured two wins against Indonesia and Malaysia. In September, the squad had a goalless match with Thailand in a frenetic match in the opener Group G.

The 2022 FIFA World Cup’s second qualifying round for Asia features 40 teams, divided into eight groups of five teams, playing in the home-away format.

The eight group winners and four best runners-up will qualify for the third and final round of the World Cup qualifiers./.