Minister of National Defense General Ngo Xuan Lich hosted a reception for General Yamazaki Koji, Chief of the Joint Staff of the Japan Self-Defense Forces, who is on an official visit to Vietnam.

At the meeting on March 2 at the HQs of the Ministry of National Defense, General Lich underscored that Vietnam always attaches much importance to expanding its relationship with Japan, including the cooperation in defense ties.

The Vietnamese minister expressed his belief that the Japanese general’s visit to Vietnam will partly reinforce the friendship, cooperation and mutual trust between the two defense ministries. 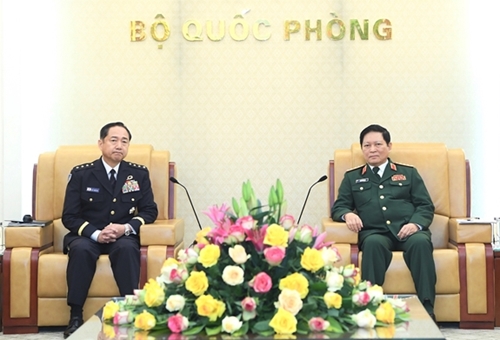 For his part, General Yamazaki Koji informed the host of the outcome of his talks with Senior Lieutenant General Phan Van Giang, Chief of the General Staff of the Vietnam People’s Army and Deputy Defense Minister.

The Japanese general laid stress on the fine development in the bilateral defense cooperation of the two countries, saying that it has become one of the important pillars, contributing to the expansion of the two nations’ relations.

Speaking highly of the above-mentioned talks, General Lich suggested the two sides continue effectively carrying out cooperation deals signed by the two defense ministries, so as to develop the two militaries’ ties in an intensive, practical, and effective manner on par with the Vietnam-Japan Extensive Strategic Partnership.