The military urged to take more drastic measures against COVID-19

Defense agencies and military units were asked to heighten vigilance and do their utmost to complete the COVID-19 prevention and control mission assigned by the Government and the Prime Minister.

Defense Minister General Ngo Xuan Lich, Deputy Secretary of the Central Military Commission (CMC), made that request during a meeting that gathered permanent members of the CMC to review the military’s outcomes in the prevention of the pandemic and the overall impacts of the disease on the military on April 15 in Hanoi.

At the meeting, the participants were briefed on the military’s achievements in performing the above-mentioned mission, pointed out difficulties facing the military, and made proposals to better fulfil the mission.

In his closing speech, General Lich highly valued the all-out efforts and timely direction of the Ministry of National Defense’s Steering Board for COVID-19 Prevention and Control and other advisory bodies, which have helped the military effectively contain COVID-19. Lich said that the military’s good results in COVID-19 control have been appreciated and lauded by the Party, State, people, and international friends. 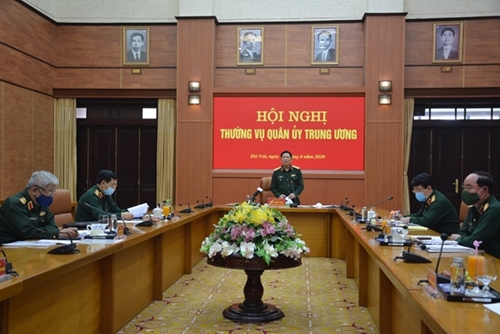 The Defense Minister praised all involved troops, especially military medical forces and troops in action in concentrated quarantine areas and patrolling along the shared borderline with neighboring countries and border paths. He affirmed that their efforts have further brightened the image of Uncle Ho’s soldiers and curbed the disease from widely spreading in the community.

General Lich spoke highly of international cooperation on COVID-19 prevention and the numerous interesting and timely articles on the military’s efforts in the fight against the disease.

The defense minister also noted that the pandemic is predicted to develop more complicatedly and unprecedentedly as there might be an increase in the number of Vietnamese expats returning home in the coming time. Therefore, he asked the military to pay due attention to the mission until the disease is contained and the social distancing mandate is over. He also reminded military units to comprehensively carry out military-defense missions in a scientific and practical manner.

General Lich instructed that in all circumstances, the military must take the lead in COVID-19 prevention and control. Therefore, units in charge of receiving and quarantining people should observe the State’s and the Ministry of National Defense’s regulations, effectively control the disease, and ensure good accommodations for the quarantined.

Moreover, due attention should be paid to improving the health of on-duty troops, checking the health of people crossing border gates and trails, and boosting information sharing on COVID-19 prevention with functional forces of neighboring countries.

The military medical sector was requested to double check and supplement medical equipment and personnel to deal with any arising situations while enhancing information dissemination to prevent the disease from spreading in military units and to ensure good health for both troops and people.

Military units were asked to observe combat readiness regulations, the State’s law and military discipline while keeping a close watch on developments in the East Sea (internationally South China Sea), Southwestern border, and key localities. They were also urged to give recommendations to the CMC and Ministry of National Defense to address situations in a timely manner.

With high political determination and proactiveness in task performance, as well as troops’ all-out efforts, the military will continue to fulfil its COVID-19 mission and other military-defense missions, General Lich emphasized.