General Luong Cuong, Director of the General Department of Politics (GDP) of the Vietnam People’s Army chaired a conference on November 4 to review Party and political work last month and honor excellent individuals and groups.

Reportedly, the Party and political work was implemented comprehensively across the army in close attachment with the military and defense missions, particularly the political and ideological education for troops, the preparations for the 11th Military Party Congress, the personnel selection for the Party organizations in the 2020-2025 term, and so on.

As a result, troops in the whole-army maintained firm political stance and had strong determination to undertake all assigned tasks. The organs of the GDP continued to function well with absolute safety. Delegates also discussed and mapped out tasks for next month. 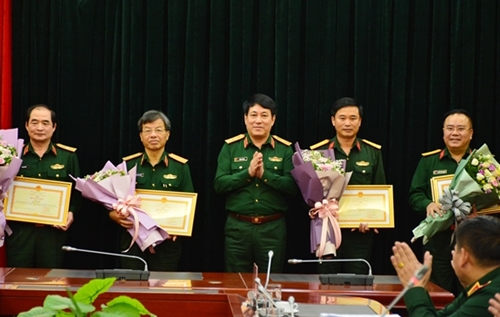 At the conference, General Cuong presented the emulation flag from the Government to the GDP’s Department of Personnel in recognition of its remarkable achievements in the “Determine to Win” emulation drive in the past five years.

In addition, he handed over certificates of merit from the Defense Minister to three individuals and three groups, which had outstanding performances in the “Army joins hand to build new-style rural area” movement in the 2016-2020 period. The Military Cheo (Popular Opera) Theatre received a certificate of merit from the Defense Minister in praise of its Gold Medal in the National Cheo Festival 2019.

General Cuong also assigned the leadership of the Theatre and the Military University of Culture and Arts to hand over the certificates of merit from the Defense Minister and the GDP’s Director to the winners of the National Cheo Festival 2019 and the Drum Off Global 2019 in Singapore.

Notably, the People’s Army Newspaper and its Deputy Editor-in-Chief Colonel Do Phu Tho were awarded certificates of merit for their excellent achievements in the “Army joins hand to build new-style rural area” movement in the 2016-2020 period.